This article is part of this week's Jerusalem Post Submission Contest. You can rate my post and affect the outcome of the contest here. 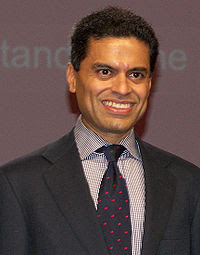 Last Sunday Fareed Zakaria, the host of GPS on CNN, opened his program with an analysis of the Iranian nuclear crisis. He started by saying:

A moment of truth is arriving on the Iran Issue. Western countries will have to face up to the fact that there are only really two choices with Iran: one, a military strike, effectively preventing the country from continuing to expand its nuclear capacity; or, secondly, learning to live with such a capacity."

Up to this point Zakaria was 100% correct in his assessment. The current talks with the Iranian regime have produced no concrete results and based on comments by the Iranian government they never will. I can understand why President Obama wants to give diplomacy every reasonable chance at success. If nothing else it provides the U.S., and perhaps by extension Israel, some diplomatic cover with the rest of the West when the inevitable war with Iran comes.

Zakaria went on to describe some of the consequences of a strike by either the U.S. or Israel on Iran. Once again he was spot on:

Now, I think striking Iran would have the first effect of uniting the country behind the regime. It happens in every country that is attacked from abroad. George w. Bush's approval ratings on September 10, 2001, were around 40 percent. In one month, after 9/11, they had risen to 93 percent. Iranian dissidents warn that the day after an American attack or an Israeli attack, they would all have to come out in support of the regime.

The political spillover from such an attack in Arab countries would also be large, and the military spillover in Iraq and Afghanistan, where Iran still funds militias, would probably take the lives of American and European soldiers. The price of oil would skyrocket, and, at best, such a military strike would delay the Iranian program, not end it, and probably delay it by just a few years.


It's all true. Indeed, the consequences to both Israel and some Sunni Arab nations, which Iran would likely attack to disrupt oil supplies, would be very high indeed. Let's also not forget the loss of innocent lives among Iranian civillians. Iran has placed it's nuclear and missile launching facilities in populated areas. Yes, the cost of a war with Iran will be terrible for all involved and many nations will get dragged in.

The rest of Zakaria's analysis is seriously flawed. Worse, it seems to reflect and reinforce the thinking of some in the Obama adminstration, which makes it downright dangerous. Zakaria continued:

Is it possible to live with a nuclear Iran? I would argue yes. Living with it is not a passive option. Iran's behavior will make it possible to maintain, perhaps even expand, sanctions on it. It will strengthen western resolve and, more importantly, make most Arab states ally themselves far more closely with the United States and Europe than ever before. The great strategic threat in the region would no longer be Israel but Iran.

These countries, the Arab countries, would make vigorous efforts to contain Iran's influence militarily and politically, as would western nations. We could press for more sanctions, inspections of all kinds. And, finally, Israel's vast nuclear arsenal, 250 nuclear weapons by most accounts, plus that of the United States would act as a deterrent on Iran. It would not use its nuclear weapons because it would clearly trigger an overwhelming response.

This is not a perfect option. But, in the real world, it seems to me a far more sensible one than a gamble that attacking Iran would solve this problem.


I don't believe for one moment that the Islamic religious fanatics who run the Iranian regime would be deterred by Israel's weaponry or any likely retaliation.

Former Iranian President Ali Akbar Hashemi-Rafsanjani, often referred to as a "moderate" in the press, called for a nuclear attack on Israel on December 14, 2001. His comments included the following:

If a day comes when the world of Islam is duly equipped with the arms Israel has in possession, the strategy of colonialism would face a stalemate because application of an atomic bomb would not leave any thing in Israel but the same thing would just produce damages in the Muslim world


We are all aware of Iranian President Mahmoud Ahmedinejad's repeated calls to destory Israel. For the Iranian leadership this is an ideological and religious imperatives. Against such imperatives conventional deterrence simply does not work.

Zakaria went on to interview three "distinguished experts", none of whom expressed the idea that Israel may have no choice but to preemptively strike Iran to avoid their own destruction. When PBS' Newshour With Jim Lehrer has a panel on issues like this they make sure to have all views represented. Even unabashedly left-wing MSNBC has had balanced panels where the idea that Israel may have absolutely no choice but to act if it is to survive has been clearly voiced. Not so on CNN. I couldn't help but remember a discussion some years ago on CNN hosted by Christiane Amanpour where her idea of differing viewpoints, left and right, meant that she had Zbigniew Brzezinski, the former Carter administration National Security Advisor, a Democrat, and Brent Scowcroft, the former National Security Advisor to President George H. W. Bush, a Republican, as her guests. Both men are notoriously anti-Israel and spent significant parts of the segment complementing each other's analysis of why everything wrong in the Middle East is Israel's fault. Zakaria's guests weren't so blatant but none disagreed with Zakaria's analysis.

In his next segment Zakaria went on to interview Judge Richard Goldstone of the infamous Goldstone report, a report widely seen as denying Israel any reasonable right of self-defense.

CNN no longer seems to be engaging in the in-your-face anti-Israel and anti-Jewish attacks like the August, 2007 two hour "Special Investigations" piece called "G-d's Jewish Warriors", also hosted by Christiane Amanpour. They have learned to be slightly more subtle. Still, there is no mistaking the purpose of a program that first presents the awful consequences of an Israeli strike on Iran and then trots out the Goldstone Report, no matter how reasonable and erudite the smiling Mr. Zakaria may seem.

CNN may be willing to gamble the lives of 7.28 million Israelis, both Jewish and Arab, on the belief that the Iranian regime is sane and can be deterred. They may be willing to gamble the lives of my family in Israel. Americans should not be. First, friends don't ask friends to die in a nuclear holocaust. Second, once Israel is gone, can some attempt to destroy "The Great Satan" be far behind? Didn't President Ahmedinejad chair a conference on the world without the United States? If deterrence doesn't work as Mr. Zakaria suggests it would what would the consequences for all of the West be?

We need to remember CNN's long history of anti-Israel bias and take all their reporting on the Iranian nuclear threat with an appropriately large grain of salt. We need to remember that the CNN agenda will undoubtedly include blaming Israel for any and all consequences of a conflict with Iran.
Posted by Caitlyn Martin at 2:14 PM No comments:

Anyone who knows me knows I like tea. I drink a lot of it. I always buy loose leaf tea of all sorts. One of the least expensive brands of loose leaf tea, and one that sells excellent English and Irish Breakfast Tea blends, is Twinings, a British company. Today I went shopping and walked right past the Twinings tea. I am buying tea from American companies, imported Chinese tea, anything but British. Today I started my personal boycott of all things British and I urge everyone who supports Israel to join me.

In case you haven't following the news the British are increasingly boycotting Israeli goods and services. Major British trade unions have been boycotting Israel since 2007. AISH has published an alarming report about the rise of anti-Semitism, not just anti-Zionism, in the UK and how it is no longer taboo to express hatred and loathing for the Jewish people in Britain. Even the BBC, which has repeatedly stoked the flames of anti-Semitism with its strong anti-Israel bias, reported a record rise in UK anti-Semitism in the first half of this year. In the spring of last year Hebrew University historian Robert S. Wistrich, who was himself educated at Cambridge Univesity stated, ”Britain has become the center for the meeting of anti-Semitic trends in Europe.” The sharp rise in anti-Semitism and anti-Semitic attacks in Britain has been reported every year since 2005.

So.. if the British hate me and my family just because we are Jewish why should I support them, their businesses and their economy? If the British hate Israel, where much of my family lives, with a passion, why on earth would I want to send my hard earned money to that dispicable country? I'd rather buy American or Israeli products. When it comes to products that aren't made or grown in the U.S. or Israel, like tea, then I'll support almost anybody else before I'll support the UK. I'm enjoying a wonderful cup of Blooming apricot flavored black tea from China right now.

Please follow the links I've provided and read up on this for yourself. If you're Jewish, a supporter of Israel, or just plain think that anti-Semitism is as disgusting as any other form of ethnic or religious intolerance or racism, please join me in this boycott.
Posted by Caitlyn Martin at 4:06 PM 2 comments: