Back in 2007 I wrote what supposed to be the first of a series of posts on Palestinian Mythology, tackling "Arab" East Jerusalem first. Almost seven years later it's way past time I resume debunking the Palestinian narrative that denies Jewish history and attempts to rewrite the reality of what happened over the millennia in what is now Israel.

My friend Ryan Bellerose, a Métis (native Canadian) man from northern Alberta, has been making the argument that Jews, the indigenous people of what is now Israel, and Native (North) Americans should find common ground and common interests. He is a Zionist and has argued that Israel should be an example to indigenous peoples. Why? Here is his explanation:


"Israel is the world's first modern indigenous state. Those who are arguing for Palestinian “indigenous rights” are usually those who have little grasp of the history, and no understanding of the truth behind indigenous rights."

As you might expect, such an assertion has generated some fairly harsh replies. One comment to such an article made three specious claims:
Clearly this man needed a history lesson, as do many supporters of the Palestinians, who know only their propaganda. Here is my response:

Jewish people are indigineous to what is now Israel, Judea and Samaria (the West Bank) as well as western Jordan (the East Bank) and southernmost Lebanon. We have had a continuous presence that dates back to the return from Egypt, sometime between 1200 and 1250 B.C.E. We were not expelled in the first century C.E. as you claim. The First Jewish Rebellion against Rome (67-73 C.E.) was one of many. The most famous is the Bar Kochba Rebellion (132-135 C.E.) when Jews expelled the Roman legions for nearly three years, which was actually the third Jewish rebellion. The Romans then renamed Iudea (in Latin) to Syria Palestina in their attempt to quash Judaism. Even the names Palestine and Palestinians were given by conquerors and are not indigenous.

Oh, and while some Jews were expelled in the second century and many scholars consider what the Romans did at that time genocide, there was still a very substantial Jewish population outside of Jerusalem. Further rebellions against the Byzantine Empire continued, most notably in the 4th and 7th centuries C.E. Indeed, how did Benjamin of Tiberias manage to raise a Jewish force of 26,000 to ally with the Persians during the Byzantine–Sasanian War if there were no Jews? The consequence of that alliance was the restoration of Jewish sovereignty in 614 C.E. The Byzantines didn’t retake Jerusalem until 628 C.E., meaning there was a Jewish state in Israel five hundred and fifty years after you say we were expelled.

Similarly, there was a Jewish majority or plurality in Jerusalem throughout most of the period of Ottoman rule, before the Zionist movement ever started. A British consular report from 1857 claimed that Jews made up nearly 80% of the population, though that number is higher than most other reports from the era. A reporter for the New York Daily Tribune, in a report dated April 15, 1854, put the Jewish population at 8,000 out of a total population of 15,500, which is still a majority. That reporter was Karl Marx.

While the Zionist Movement certainly started in Europe, the fact remains that a majority of modern Israelis are people with no ties to Europe whatsoever. Two thirds were born in Israel. A majority are either descended from or are people who were expelled from Arab countries, not Europe, Jews who have lived in what is now Israel for centuries, or from other non-European places like Ethiopia. Genetic studies, most importantly recent ones since the decoding of the human genome, make clear that European Jews are Middle Eastern people. If you accept the (rather nonsensical) idea of generational refugees as the Palestinians do, then Ashkenazi Jews must also be refugees from what is now Israel.

Put simply, Jews are the indigenous people of Israel. Palestinians? 80% are descended from people brought in by the British from neighboring countries to build infrastructure. Of the remaining 20% most are descended from Arab conquerors, not native to the Levant.

Finally, you assert that Israel was created with aid from the U.S. to create and maintain American hegemony. That is entirely false. Jews were under an arms embargo from the United States during the revolt against the British (1946-48) and the War of Independence (1948-49). Not one penny of military aid went to Israel from the U.S. until the Kennedy administration in the 1960s. The arms mostly came from Czechoslovakia (at the direction of the Soviet Union) and France, not the U.S. Last I checked there is no Czech hegemony anywhere. Meanwhile, during the 1948-49 war, the Arabs fought under the command of a British general. In that war, as others, the Arabs (including the people who would come to be known as Palestinians later) were on the side of the foreign conqueror.

I really suggest that you read real history rather than propaganda. Ryan Bellerose clearly has.
Posted by Caitlyn Martin at 8:54 PM 3 comments:

A Note About Dinner and Kosher Foods in America 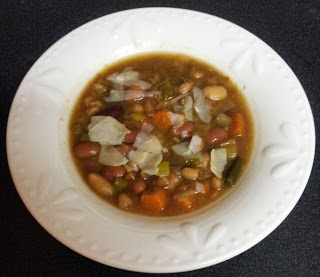 I made a big pot of bean and leek soup (with carrots, garlic, a little bit of onion, a finely minced habanero pepper to add a little kick, plus spices) in a Crock Pot. I had some as part of dinner tonight topped with some shaved Parmesan cheese, with a piece of baked Alaskan cod and a piece of very fresh rye bread. It's wonderful, but since it's just me that eats it I'll be having it for a week or more. That's why I do things like this (big pots of soup, chili or cholent) so infrequently.

I used half of a bag of a 15 bean mix intended for soup. It had the appropriate kosher certification on it. On the back cover it had a soup recipe which started by telling me I'd need 1 lb. of ham hocks. Really? Tell me this: why would a company go through the expense of kosher certification and then only put a blatantly treyfe recipe on the back of the package? Wouldn't it be better to have two recipes, one of which appeals to the people who looked for that symbol of kashrut and perhaps vegetarians as well? Wouldn't that make more sense? Trust me on this: you can make a delicious soup from those beans without any pork.

[Note: This started out as a Facebook post. I've also published it in my personal blog.]
Posted by Caitlyn Martin at 5:48 PM No comments:

An open letter by blogger Paula R. Stern to U.S. Secretary of State John Kerry echoes much of the right wing commentary I've seen coming out of both Israel and the diaspora Jewish community. It also echoes the really unfortunate comments by Israeli Defense Minister Moshe Ya'alon who told Kerry to "leave us alone."

"You won’t fail in your goal of ramming peace down our throats because of this, however. You will fail because, amazingly enough, you don’t even understand Israel. We are the easiest to get, the easiest, honestly. All you have to do is listen and see – but even that is beyond you.

For a long time now, the Arabs have fooled you. They’ll speak to you of peace over the coffee they serve you and then when you leave the room, they slap each other on the backs and laugh – another successful day at making the US look stupid."

Secretary Kerry did not threaten Israel. He simply relayed the dangerous trends he sees building around the world. BTW, the Palestinians want to haul him before the ICC for supposedly threatening Mahmoud Abbas, something else he did not do. Let me just say this is the strongest terms: I disagree with this letter.

Secretary Kerry is no simpleton. He has not been fooled. He may be on mission impossible but he is anything but stupid or naive. Predicting a failure that seems likely doesn’t mean that trying is not worthwhile. It is the correct and moral thing to do. It’s what separates Israelis and Jews from the Palestinian Arabs: we value life and we strive for peace.

Of course, I could make equally negative comments about Naftali Bennet, whom Stern praises. Bennet fails to understand that Israel cannot possibly rule over millions of hostile Arabs and survive as a democratic Jewish state. Right wing Israelis also live for an impossible dream. In that sense they are just like the Palestinians Stern is so critical of.

When my father fought for Israel’s independence in 1948-49 he fought for a state that, for the next 18 years, did not include Judea and Samaria and yet it was still a Jewish State in Israel. In 1967, when other Israelis celebrated, his first words on hearing of the great victory were, “Occupation. Bad business.” I think history has proven him right.

Stern knows her history. Indeed, she has seen it first hand, including the horrors of terror perpetrated by Palestinian Arabs on innocent Israelis. Sadly, possibly due to her very real pain and justified anger, she draws the wrong conclusions from that history. A peace agreement, should it ever come (which I seriously doubt) does not mean a terrorist state or greater threat. Gaza became a threat because it was a withdrawal without any peace agreement, and without basic steps to insure Israel’s security, such as controlling the border with Egypt. Prime Minister Netanyahu has made clear that he won’t make those mistakes again.

Peace with Egypt, on the other hand, has held for nearly 35 years. It held through two tumultuous changes of government and two years of Islamist rule by Mohammed Morsi and the Muslim Brotherhood. How many Israeli Jewish lives have been saved by making peace and by giving up Sinai?

Instead of anger at John Kerry we should be thanking him for allowing us to demonstrate once again that Israel is the one side in the conflict that always strives for peace. Yes, he may fail and yes, if he does, it will be because the Palestinian leadership is not ready for peace. I give him credit for trying, and credit for trying to bring about what, for most Israelis, is the great hope and dream: peace and security.
Posted by Caitlyn Martin at 4:33 PM 7 comments: